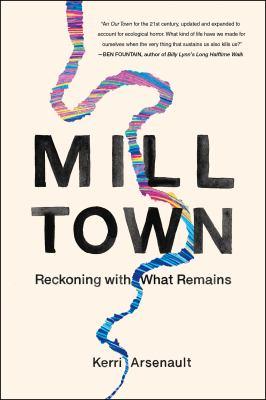 Mill Town: Reckoning with What Remains

Arsenault reflects on her serene hometown and the cloaked environmental corruption plaguing it. The author, a National Books Critics Circle board member and book review editor at Orion, grew up in Mexico, Maine, a small town fortified by the Androscoggin River. She writes poignantly of growing up in a large nuclear family surrounded by the town’s dense forestlands. Her father and grandfather worked at the local paper mill, an entity that economically grounded the town and employed a large percentage of its residents, many of whom remained blind to the ever changing world around them. “Monumental philosophical ideas,” writes Arsenault, “were surfacing across America—feminism, environmentalism—however, there were no movements in Mexico but for people walking across the mill’s footbridge to work.” Underneath Mexico’s serene veneer festered a secret that the author began to investigate with steely determination in 2009. While visiting to attend a funeral, Arsenault dug into the town’s history and the Arsenault family tree, both of which were riddled with cancer deaths. Expanding her research outward, she scoured town documents and interviewed family, childhood friends, and surviving townspeople to uncover proof that Mexico and the surrounding area had been dubbed “cancer valley,” with generations of families suffering terminal illnesses. Arsenault disturbingly chronicles how the paper mill released carcinogenic chemicals into the atmosphere and dumped them at the edge of the river, and she shows how the malfeasance was buried in bureaucratic red tape, EPA coverups, and outright lies even as Mexico continued to suffer a “never-ending loop of obituaries.” In this masterful debut, the author creates a crisp, eloquent hybrid of atmospheric memoir and searing exposé. She writes urgently about the dire effects the mill’s toxic legacy had on Mexico’s residents and the area’s ecology while evocatively mining the emotional landscape of caretaking for aging parents and rediscovering the roots of her childhood. Bittersweet memories and a long-buried atrocity combine for a heartfelt, unflinching, striking narrative combination. Copyright © Kirkus Reviews, used with permission.