If You Liked Where the Crawdads Sing 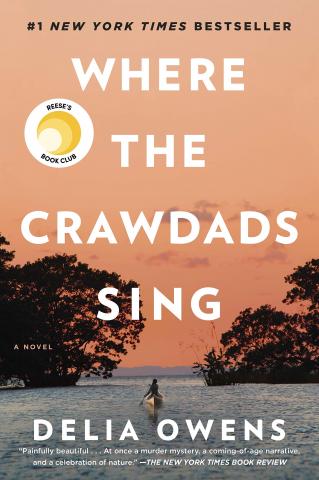 With its lyrical descriptions of nature and tempestuous love story, Delia Owens’ evocative debut novel Where the Crawdads Sing has taken the literary world by storm. If you enjoyed it, or if you’re still waiting for your reserve copy to arrive, here are some similar titles you might enjoy.

Aldo Leopold’s classic A Sand County Almanac is one of the books that Owens says inspired her to write her novel: “After university, I spent much of my adult life studying wildlife in some of the most remote regions of Africa. Living in those far reaches of the earth inspired me to wonder if I could write a work of compelling fiction against the backdrop of a wild and wonderful place. To combine Leopold-inspired nature writing with a (hopefully) page-turning plot. Where The Crawdads Sing is my attempt at such a dream.”

Let’s No One Get Hurt, by Jon Pineda. A teenage girl squatting in an abandoned boathouse with her disgraced college professor father in the swamps of the American South begins an unbalanced relationship with the rich, bratty son of a developer who has bought the property. Pineda spins a taut, dramatic story of a young outcast, set against a sultry, ominous Southern Gothic backdrop.

The Marsh King’s Daughter, by Karen Dionne. A woman whose birth occurred as a result of her teen mother’s abduction and imprisonment in an isolated marshland cabin risks the adult family that does not know her past when she uses survival skills honed in childhood to track down her murderous father. A gripping tale of grit, determination and survival set against the stark beauty of an unforgiving wilderness.

My Absolute Darling, by Gabriel Tallent. Enduring an isolated existence after the death of her mother, 14-year-old Turtle roams the rocky shores and tide pools of the California coast and refutes every outside attempt to engage her before an unexpected friendship with a newcomer helps her realize the vulnerabilities of her life with her charismatic father. Another potent, visceral blend of character and detailed natural setting.