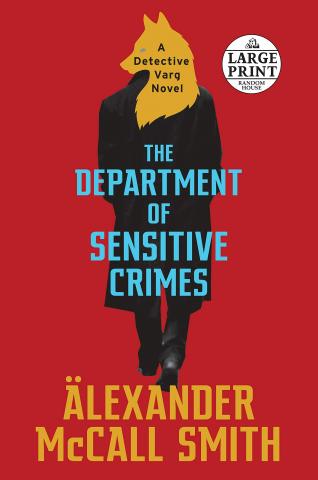 What happens when cranky, poorly motivated or seemingly-incompetent individuals are all sidelined together into a single work unit? They end up solving the mysteries that no one else could, of course. Or, at least, in fiction they do.

The Department of Sensitive Crimes by Alexander McCall Smith
The author of The No. 1 Ladies’ Detective Agency series is back with this first in a new series. Ulf Varg has been placed in charge of Malmö, Sweden’s Department of Sensitive Crimes, the group relegated to investigating crimes that are too minor or weird for the main Criminal Investigation Authority to deal with.  As with McCall Smith’s other books, character thoughts and interpersonal relationships take the lead in the narrative, while the various mysteries investigated give the reader a look into Swedish society and culture.

Dirk Gently's Holistic Detective Agency by Douglas Adams
What do a dead cat, a computer whiz-kid, an Electric Monk who believes the world is pink, quantum mechanics, a Chronologist over 200 years old, Samuel Taylor Coleridge (poet), and pizza have in common? Apparently not much; until Dirk Gently, self-styled private investigator, sets out to prove the fundamental interconnectedness of all things by solving a mysterious murder, assisting a mysterious professor, unravelling a mysterious mystery, and eating a lot of pizza.

The Girl with the Dragon Tattoo by Stig Larsson
Harriet Vanger, a scion of one of Sweden’s wealthiest families disappeared over forty years ago. All these years later, her aged uncle continues to seek the truth. He hires Mikael Blomkvist, a crusading journalist recently trapped by a libel conviction, to investigate. He is aided by the pierced and tattooed punk prodigy Lisbeth Salander. Together they tap into a vein of unfathomable iniquity and astonishing corruption, with Lisabeth helping Mikael out of a series of hostile situations along the way.

The Keeper of Lost Causes by Jussi Adler-Olsen
Get to know the detective in charge of Copenhagen's coldest cases in the first electrifying Department Q mystery from New York Times bestselling author Jussi Adler-Olsen. Darkly humorous, propulsive, and atmospheric, The Keeper of Lost Causes introduces American readers to the mega-bestselling series fast becoming an international sensation.