The Beautiful and Bizarre Imagination of Roald Dahl 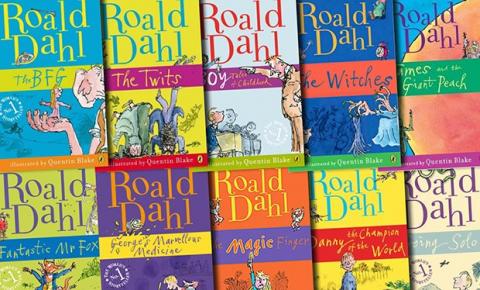 Roald Dahl was a uniquely gifted writer, capable of blending the wonderment of childhood with subtle adult humor.  His use of dark comedy and profoundly strange situations within children’s stories has influenced the works of Tim Burton, Neil Gaiman, and J.K. Rowling.  Still, there was always a deep sense of warmth beneath his frightening plot points and illustrations.  Dahl’s stories inevitably show children overcoming the surreal cruelness of adults.  His protagonists succeed through kindness and empathy, all while providing young readers with a distinctively fantastic and enjoyable experience.  Here are some of Dahl’s inventive, offbeat tales, all of which are available through the EBPL catalog:

In typically ridiculous fashion, James and the Giant Peach opens with James’ parents being killed by a rhinoceros.  He is forced to live with two evil aunts who seem like they came straight out of a Grimm fairy tale.  As a peach from their tree magically grows to the size of a house, James befriends insects who become his guide through a series of improbable journeys that carry him to freedom and independence.  Dahl manages to display escaping a difficult home life in a whimsical manner that encourages readers to gain a better perspective of the world around them.  Only a truly special writer can turn a charmed piece of fruit into a metaphor for self-exploration, and he does this wonderfully.

Matilda is a precocious child who wants little more than a good book to read.  Her parents, however, fail to understand how books can be compelling as they incessantly watch television.  The real threat to Matilda’s happiness lies in Mrs. Trunchbull, her school principal who is a hammer-throwing champion with a personality to match.  Through a demonstration of fortitude and patience befitting her intellect, she is able to withstand the cruelty heaped upon her until both she and the charming schoolteacher Miss Honey find their happy ending.
Oh yeah, Matilda also has crazy telekinetic powers that she wields in the most devious and satisfying way.  Did I fail to mention that part?

Though technically a children’s book, Fantastic Mr. Fox depicts a Robin Hood-like scenario of a wily, poor Fox stealing food from those of greater means in order feed his family.  However, he learns a power lesson about greed and compassion.  The presentation factors heavily into the overall mood of the story.  Brilliant illustrations make it feel light and fun, even though there is a clear political message at play about equity.  The Wes Anderson-directed film adaptation is faithful to the source text, bringing the artwork to life through stop-motion animation.

In the short story collection The Best of Roald Dahl, a woman murders her husband with a frozen leg of mutton, then serves it to a group of detectives hours later.  A weary traveler is a bed and breakfast’s first guest in years, and only realizes why that is until it’s too late.  A man hears trees shrieking upon cutting them down, and comes to believe that everyone else also hears, but simply ignores, the cries.  These are just three of the stories from Roald Dahl’s Best Of collection, which features delightfully eccentric works for an adult audience.