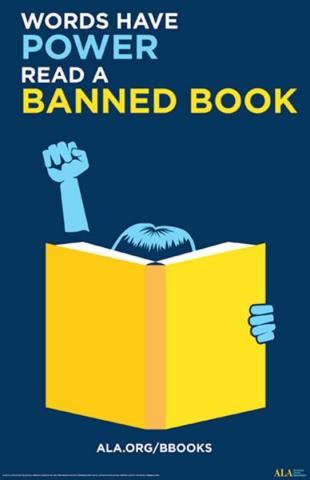 The public library, given its mission to serve in an impartial capacity, is constantly under threat of censorship by a vocal minority that morally objects to certain materials.  It is precisely because of this threat that attention must be drawn to the importance of unpopular or marginalized perspectives.  Banned Books Week, starting on September 26, goes a step further than simply permitting the free expression of information and alternative opinions.  It emphasizes this position by spotlighting the materials most likely to draw complaints from the public.  Here are some of the most frequently challenged books, as documented by the Office for Intellectual Freedom:

The Absolutely True Diary of a Part-time Indian by Sherman Alexie
“They don’t even read the thing,” said Alexie of his 2007 novel, which has been challenged for most of the reasons on the above chart.  As a modern-day story of a Spokane Indian teenager attempting to leave his declining reservation, it is bound to attract claims that it is culturally insensitive, promotes drug and alcohol abuse, and contains offensive language.  However, the book manages to be both funny and heartbreaking at the same time, and Alexie shows a great deal of tenderness for his characters.

The Adventures of Huckleberry Finn by Mark Twain
Initially conceived as a travelogue of a boy’s back country adventures, Twain reworked the text to entail complex depictions of race and identity.  Though the novel satirically criticizes notions of racism, the depiction of its malicious consequences is nonetheless raw and potentially unsettling.  These factors have led to it being a frequently censored book for the past 130 years, which is both a testament to the timelessness of Twain’s incredible prose and the underlying racial struggles of modern society.

The Bluest Eye by Toni Morrison
This novel follows eleven-year-old Pecola Breedlove as her African-American family struggles to get by in a predominantly White community during the Great Depression.  It contains graphic sexual situations and poignant instances of racism.  Morrison’s depiction of resiliency in the midst of oppression and internalized hatred is a true celebration of the human spirit.  These themes characterize some of her finest novels such as Beloved, Sula, Song of Solomon, and her most recent work, God Help the Child, all of which have been challenged.

Currently a Broadway play, this 2003 novel follows Christopher, a teenager irritated by his inability to connect and interact with others.  Though he appears to have some sort of personality disorder, Haddon writes that the book is far more “about being an outsider, about seeing the world in a surprising and revealing way.”  Christopher’s use of inappropriate language, compelled by social frustrations, has led to claims that it is unfit for a young adult audience.  To Haddon’s credit, the language serves to humanize the protagonist’s struggles and make sense of his alienation.

Looking for Alaska by John Green
Topping the most challenged list of 2015, this young adult novel focuses on Pudge and Alaska’s chaotic, intense relationship at an Alabama boarding school.  Multiple high schools have drawn controversy for assigning the book on the grounds that it is sexually explicit and unsuited for teenagers.  Here is John Green’s defense of his work, and its suitability for a teenage audience:
Take a look at this list of frequently banned and challenged books.  Also, be sure to take this quiz to determine which banned book you are.